It’s easy to see how having the headquarters of one of the world’s top luxury car manufacturers would be beneficial to any location, which is why it’s not all that surprising to hear that New Jersey officials are campaigning to keep Mercedes-Benz within the state borders. 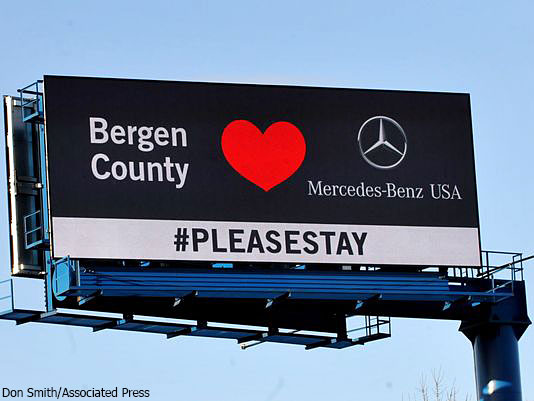 For one thing, the German automaker’s US headquarters – located at 3 Mercedes Drive in Montvale, NJ – is responsible for providing around 1,000 jobs for residents in the area. That’s not something you can just give up.

While there’s been no word of any possible move yet, and Mercedes-Benz officials have declined to comment on the matter,  state officials like Assemblywoman Holly Schepisi are keen on Mercedes-Benz staying right where it is, going so far as to give public statements about offering incentives for the company.

In addition, there are also some new digital billboards proclaiming that ‘Bergen County loves Mercedes’. Bergen County, in which the borough of Montvale is located, is the most populous in the state, and it is also among the wealthiest counties in the United States.

According to Mercedes-Benz spokesperson Rob Moran, the company loves the state. He did not comment about any possible moves by the company, however. Still, it’s not like Mercedes-Benz would be moving out any time soon. Transferring a company HQ’s is no small task, and there’s a lot of logistics and planning involved, so we’re bound to get word of big news like this in case there are any developments.