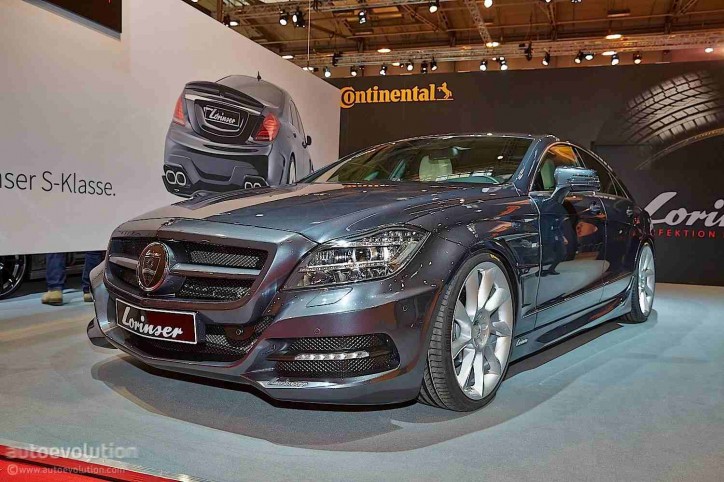 Live at the Essen Motor Show, the famous tuner Lorinser revealed its work involving the 2015 Mercedes-Benz CLS, particularly the CLS350 model of the range. Despite the latest stock version of the car already displaying a fabulous facelift from Mercedes, Lorinser believed it could still benefit from a few tweaking.

The German tuner provided the 2015 Mercedes-Benz CLS350 with its signature set of stylish bumpers, side skirts, headlights, trunk lip spoiler and quadruple exhaust pipes. The suspension of the car was lowered also to provide better handling and comfort to its occupants. In addition, a new set of wheels, each with nine rims encircling the center, were fitted in the car. It should be noted that the said rims were shaped like a fan.

The interior of the 2015 Lorinser Mercedes-Benz CLS seemed unchanged. So, buyers should expect the same standard high-end leather of the three-pointed star brand.

The diesel-powered V6 engine of the 2015 Mercedes-Benz CLS was left untouched too. Therefore, its power remained at 258 hp with around 620 Nm of torque partnered to a nine-speed automatic gearbox. Despite having a stock engine, the car could accelerate from a complete halt to 100 km/h in only a span of 6.5 seconds. Moreover, even with the power of the vehicle, its fuel-efficiency is something to be praised because it only averages 5.4 l/100 km.

Pictures of the Lorinser-Customized 2015 Mercedes-Benz CLS

Check out the photos below provided by autoevolution, which highlighted the Lorinser-tuned 2015 Mercedes-Benz CLS: