SEND US A TIP
Gallery
2 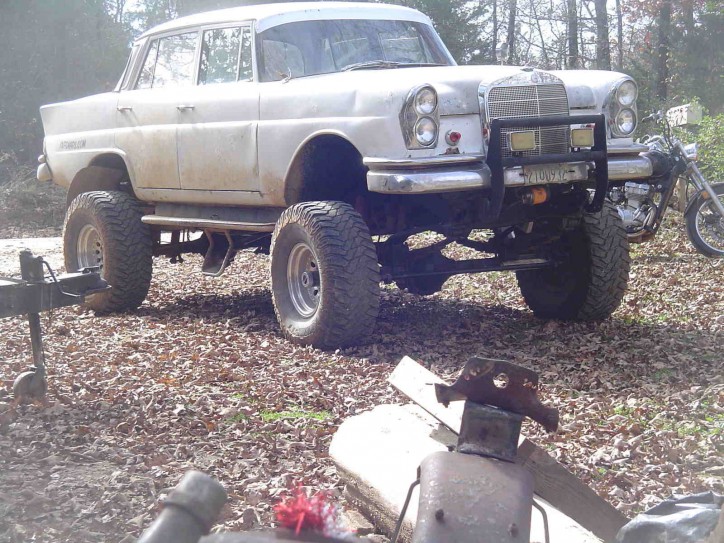 The 1961 Mercedes-Benz 220SE is its brand’s top-range vehicle during its production stage. The car was famous for having a design that focused on passenger comfort and safety. Among its known features were wider driver visibility compared to its predecessors, having crumple zones in its front and rear which were capable of absorbing kinetic energy from impacts, plus its patented retractable seatbelts. Its styling and unique fintail design was also considered as revolutionary in its era.

So, if you hear about a working Mercedes-Benz 220SE you might be expecting something very classy that will stand out whenever you drive it. Well, the version of the car found on eBay does indeed stand out in the highway, but not because of its elegance. Instead, it is because of its elevated wheels.

The said monster truck, sold for only $2,555.55 in the auction site, borrowed its chassis from a 1978 Chevrolet Blazer, putting its power in all its four wheels. Then, the usual monster truck components were fitted on the unfortunate 220SE including off-road wheels, side steps and tire package.

The original six-cylinder engine of the no-longer-so-luxurious Mercedes was replaced with a V8 engine. The seller noted though that he still has the original engine of the vehicle, but he will be charging extra for it if the buyer opts to acquire it.

Clearly, a lot of effort and money have been invested into the Mercedes 220SE monster truck, which could have been put to better use in the restoration of the car instead of modifying it into what it is now.

Below are the other photos of the poor thing: