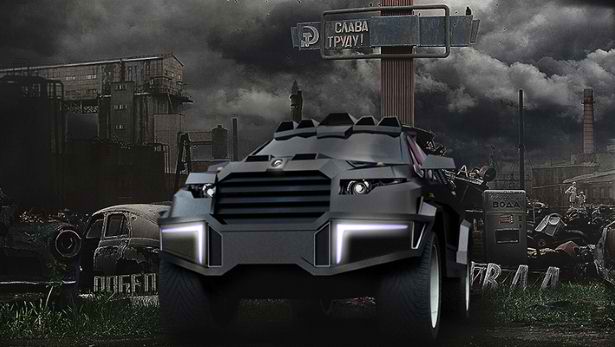 Dartz Motoz Company is known for its notoriety in taking to the extreme any vehicle that hit its tuning shop. Recently, it unveiled the Prombon Black Shark, which uses the platform of the Mercedes-Benz GL-Class.

The Black Shark got its name from a Russian attack helicopter. The SUV was taken to another level by fitting it with massive armoring, very powerful engine, and military-grade technology.

The armor of the vehicle is made from standard bulletproof materials with a B7 ballistic protection level. That means it can withstand a shot even from an armor-piercing 7.62x51mm ammunition or 7.62x54R ammunition used in a Dragunov SVD rifle and PKM/PKP  machine guns. The mix of Kevlar and titanium in the body of the vehicle lets it repel magnetic mines too.

The Black Shark is also equipped with an electric shock system to ward off a mob. Then, it has a Golden Eye security system that uses fingerprint and retina scanning. In addition, the vehicle has the Vigitron system for monitoring the driver, a road analyzing system for detecting explosive charges planted on the road ahead, and a jammer for communication devices.

The armored-SUV based from the Mercedes GL-Class provides luxury and comfort features as well. Among them are Vertu’s concierge providing around-the-clock and global access to a personal assistant, plus two Vertu luxury smartphones.

Buyers of the Black Shark can choose between two engine types. The first is a V8 biturbo engine, and the other is a V12 biturbo engine. It should be noted that the badge of the vehicle’s engine contains a “V2” reference to promote Vertu. The maximum power output of the armored-SUV can go as high as 1,500 hp depending on the engine preference of the buyer.

Dartz boasted that former James Bond actors Pierce Brosnan and Roger Moore even praised the vehicle for its top-of-the-line features.