SEND US A TIP
Sprinter, Tuner
0

Mercedes-Benz Sprinter Turned Into a Bank Vault by INKAS 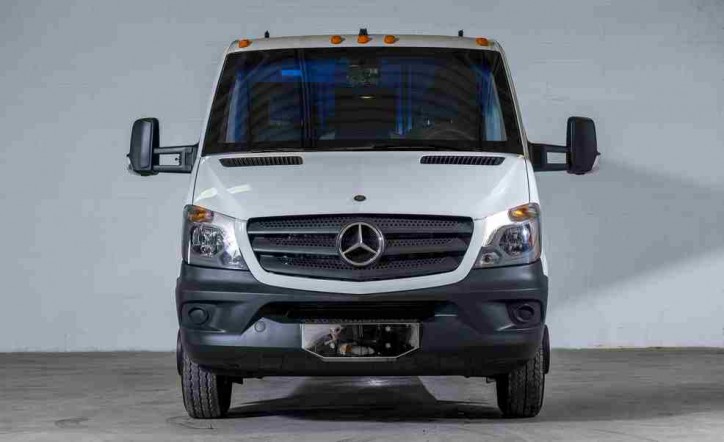 Do you have plenty of cash or expensive merchandise to move from one location to another? Maybe the Mercedes-Benz Sprinter modified by INKAS—the one that brought to us the bulletproof Mercedes G63 Limo—is the right vehicle for you.

Early this month, the Canada-based tuner revealed its new masterpiece, which is ideal for carrying high-valued goods. What made the INKAS Sprinter the right van for the job is that its interior has been customized to carry a mobile bank vault.

No changes were made in the frame of the Mercedes-Benz Sprinter. However, a custom-built composite body shell using lightweight armoring was added into it to improve its protection from outside attacks or intrusion. Then, the stock sliding door of the vehicle was replaced with a side-hinged door to provide improved security to its passengers, particularly its valuable contents. In addition, a small rectangular window was placed on each of its sides to allow the occupants of its middle compartment to scan the areas on each side of the vehicle.

Overall, the van has three compartments, which are separated by thick walls and small doors. The front houses the driver and passenger while the middle part is intended for the guards. The last compartment is where precious cargo goes in.

The vehicle is capable of carrying around 1,200 pounds of additional cargo with ease. Its total weight was not revealed by its tuner, but looking at the lightweight materials used in the vehicle, it should weigh less than most of the armored vehicles we have seen so far.

At a quick glimpse, it is hard to suspect that the INKAS Mercedes-Benz Sprinter has been modified, as the tuner retained most of its original design. This makes the van easy to blend into traffic and prevent it from attracting too much attention.

INKAS also left the 3.0-liter diesel V6 engine of the vehicle intact. So, expect the same output given by the standard Sprinter.