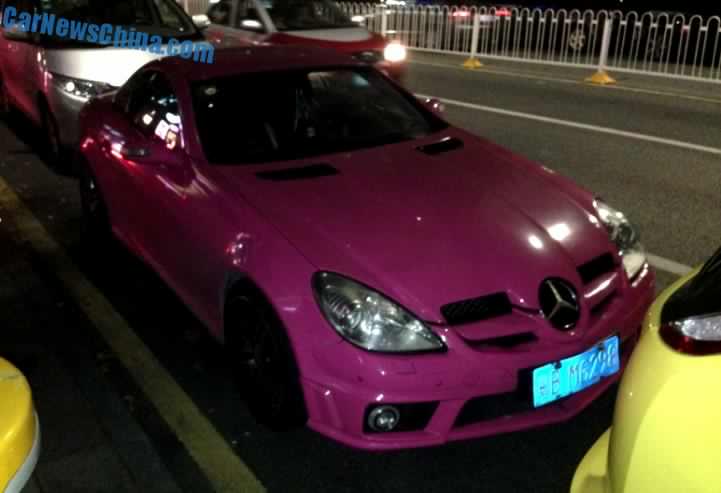 A flashy pink Mercedes-Benz SLK 55 AMG was recently spotted in China. According to Car News China, which provided the images of the car, the photos were taken in the city of Shenzhen in Guangdong Province.

The car came in glossy pink, which was made flashier by the street lights that illuminated it along the way. It also had darkened windows, quad exhaust system, and AMG alloy wheels adorned with five twin-spoke alloy design.

Although I am not really a fan of this kind of finish for an SLK, I still admire the work done in the car. It was certainly attention-grabbing even while it was cruising late at night. It really came “pretty in pink”.

No information was made available regarding the engine specs of the car. However, it should be noted that its last-generation model, the R171 SLK 55 AMG, had a 5.4-liter V8 engine sitting under its hood.

The V8 enables the car to dish out 355 hp and 510 Nm of torque. Then, the power lets the vehicle achieve up to 278 kmph in its speedometer. Lastly, its sprint from zero to 100 kmph is estimated to be somewhere around 4.3 seconds.

The Mercedes-Benz SLK 55 AMG fetches a serious amount of cash in China. Based on the report, it is priced around 1.29 million yuan. That is equal to 207,000 in US dollars.

Check out the other photos of the pretty pink Mercedes-Benz SLK 55 AMG below: