Videos Show the Resiliency of the Smart Fortwo 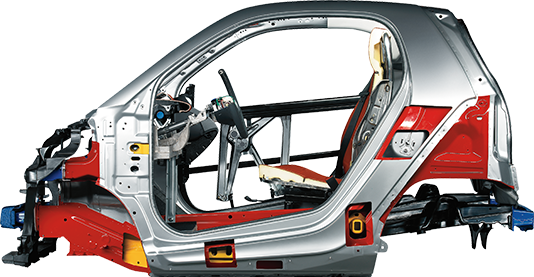 The tridion safety cell of the Smart Fortwo.

One of the key selling points of the Smart Fortwo is its ultra-durable tridion safety cell. Basically, the feature has been patented by Daimler’s Smart division to offer maximum protection to the electric vehicle’s occupants, which comes in addition to the safety functions provided by the car’s seatbelts and airbags.

According to the Smart website, the tridion safety cell is inspired by roll cages found in racecars. It is made of high-strength steel, which is engineered to evenly distribute the force from a crash.

To demonstrate how the safety frame of the Smart Fortwo can hold up to a real-life collision on the road, Daimler recently released several videos that involve crashing the small car to much bigger cars like the Mercedes-Benz S-Class and C-Class sedan.

Below is a video displaying the result of the Smart Fortwo versus Mercedes-Benz S-Class collision test:

In comparison, the Fortwo is barely half the size of the S-Class sedan, making the match a David versus Goliath type of contest. However, the smaller vehicle surprisingly held up against its Mercedes big brother in a 50 km/h head-to-head crash. The result was nothing short of impressive because the two cars, despite their totally wrecked hoods, were able to protect their respective occupants. This is a proof of Daimler’s consistency in providing safety to its customers regardless if its buyers have chosen its luxury vehicles or its smart cars.

Here is another video pitting the Fortwo against the C-Class in a 64 km/h collision, which produced the same result:

Lastly, here is an old advertisement showing how the roof of the Smart Fortwo can hold 7,000 pounds of weight: