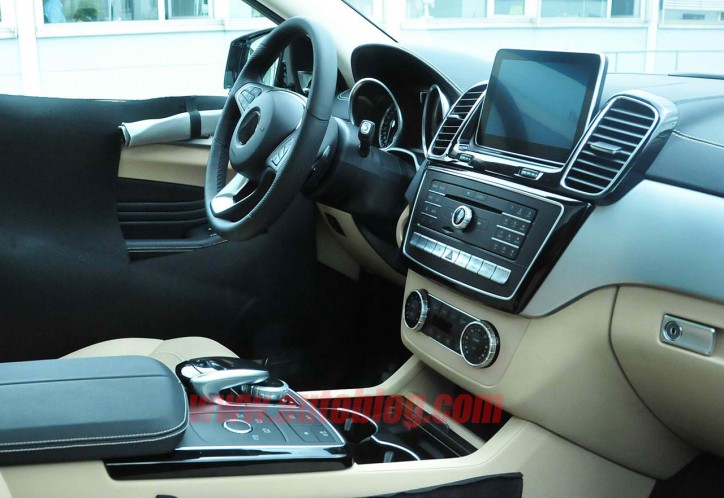 Last April, the first set of spy shots of the Mercedes-Benz MLC surfaced. The pictures came just after the Easter unveiling of the concept coupe SUV at the 2014 Beijing Auto Show.

Then, in the month that just ended, we have featured a sneak peek of the interior of the Mercedes-Benz MLC. It only came from a close-up shot of the front passenger window though, so there were the glass and door preventing us from having a full look at what’s inside the vehicle.

Recently, thanks to Autoblog, we now have a complete view of the Mercedes-Benz MLC interior. Click the thumbnails below to see what’s inside the upcoming coupe SUV of the brand, including some new photos of its exterior under a camouflage:

As seen in the photos above, the Mercedes-Benz MLC interior is embellished with the combination of black, beige and gray leather with chrome accents. The same controls present in the latest M-Class are also present, with only minor enhancements.

The Mercedes-Benz MLC is reported as the answer of the three-pointed star marque to the BMW X6, which has been in the market for almost six years already without a competition from Mercedes. It should be noted that some styling cues of the BMW X6 were apparently present with the photos of the MLC way back when it was only a concept.

The Mercedes MLC would be carrying the M-Class platform. The coupe SUV is rumored to feature different engine options such as the gasoline and diesel V6 engines as well as a hybrid model.