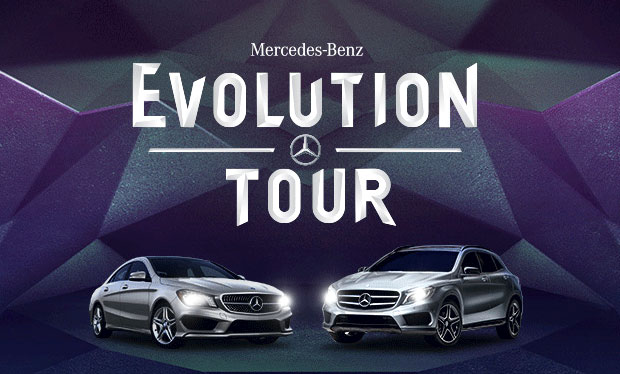 Music festivals are all the rage these days, and Mercedes-Benz USA is looking to tap into those in order to promote the GLA and CLA vehicles and appeal to a younger demographic — by way of the Mercedes-Benz Evolution Tour that is set to start this week.

The tour offers entertainment and exclusivity, as it is an invite-only series of concerts. It will start in good ol’ New York, with stops in the following major cities: Atlanta, Chicago, Dallas, Los Angeles, Miami, and Washington D.C.

What Mercedes-Benz is trying to do is tap into the 18 to 34-year-old market, and an event like this should fetch a considerable amount of mileage in social media. There will even be a ‘social media wall’ during the concerts, where Tweets and status updates by attendees can be viewed.

In addition, Mercedes-Benz will put up interactive booths and vehicle displays. Attendees will also have a chance to test drive the GLA as well as the CLA.

According to MBUSA VP for marketing Drew Slaven, the tour will not feature big-name bands and acts. Instead, it will be chock-full of what he calls “authentic, up-and-coming artists” who will also serve as brand ambassadors for the automaker, at least for this tour. Opening acts will feature local bands from the respective cities.

In order to get a shot at the invites, people are encouraged to participate in an online campaign where they will upload photos that they think captures the program’s essence, or some status update that tells the automaker that they should get an invite.

Those interested to attend the tour can visit http://www.mbevolutiontour.com/ to know more and participate. The hashtag #MBEvolutionTour will also be used across the campaign.