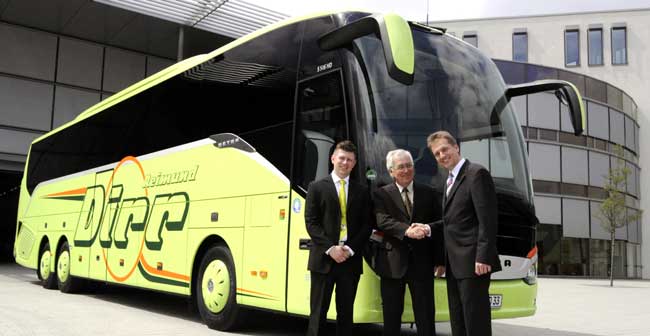 A couple of new Euro VI-compliant Setra ComfortClass 500 units were just delivered to Reimund Dirr, owner of a Bavarian coach operator that takes people across several destinations around Europe. The two, an S 516 HD and an S 517 HD, add to the growing ‘green fleet’ of the operator.

“As far as I’m concerned, low operating costs and reduced fuel consumption are important factors when it comes to buying new vehicles,” said Dirr, who owns Mindel-Reisen and Stricker-Reisen. “Setra has certainly kept its promise in full.”

With Record Run Buses 2012, Daimler demonstrated the capabilities and improvements that the Setra ComfortClass 500 range had over the previous models. These improvements were in terms of fuel consumption and emissions figures. That’s thanks to the BlueEfficiency Power backing these coaches up.

The two models delivered were classified as 4-star coaches, and they come with state-of-the-art features like driver assistance systems and a Visibility package that includes bi-xenon headlamps and ambient illumination.

Since 1979, the coach operator had already been turning to Setra. Incidentally, that was when Reimund Dirr took over Mindel-Reisen. Then he expanded by also taking over another coach company, Stricker. At the moment, the operator’s green fleet has 26 Setra coaches.