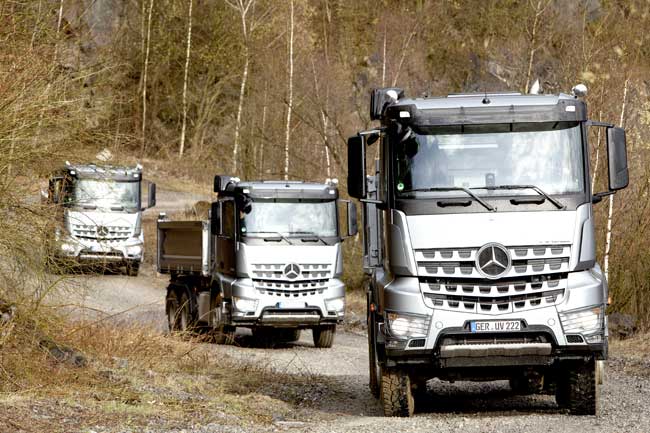 In a recent media article, Mercedes-Benz referred to its new Euro VI-compliant heavy-duty truck line as the ‘A-Team’, which actually started in 2011. After continued refinements and constant development, the three truck models, the Actros, Antos, and Arocs (pictured), are now fully compliant with the emissions standard. That’s something that Daimler and Mercedes-Benz Trucks is counting on to further grow its Europe-leading 23 percent market share in 2012.

Whether the ‘A-Team’ refers to the fact that the names of the trucks all start with an ‘A’ or to the fictional group of soldiers of fortune featured in a Mr. T-bannered TV series in the mid-80’s and in a 2010 film remake starring Liam Neeson and Bradley Cooper, we don’t really know. It’s probably the former, but both cases actually apply. The three trucks are designed to suit  practically any application and to accomplish any requirement within the segment.

Mercedes-Benz saw being able to develop its trucks for the Euro VI standard early on as an advantage over the competition. “Not only did we address this issue earlier than anyone else; we also viewed this obstacle as an opportunity,” said Mercedes-Benz Trucks chief Stefan Buchner.

Thanks to that, the division was able to grow its lead in the European market, even with serious fiscal issues affecting the region. The key is providing Euro VI vehicles at competitive rates. With the ‘A-Team’ being built on just one platform, they are also produced more efficiently and with lower costs, allowing them to be competitive against other marques’ existing models while featuring the latest technology.