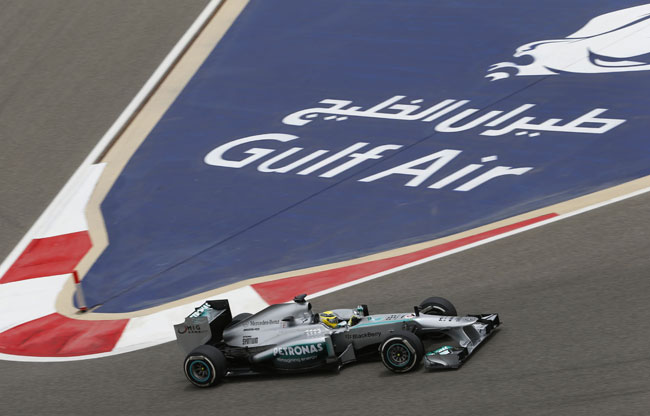 Nico Rosberg failed to convert his second career pole into a victory Sunday, encountering pressure from those behind him right from the get-go of the 2013 Bahrain Grand Prix. He ended up finishing in P9, while Lewis Hamilton started from that spot and managed to move up to finish 5th with some superb driving throughout the race.

It was clear that Rosberg’s car lacked the pace to keep up with the other contenders at the Sakhir circuit. His strong driving managed to keep his pursuers at bay early, but he all but lost the race lead by the time lap 4 came around. By lap 20, he was really struggling to keep in pace, losing P3 to Jenson Button and then relinquishing P4 to Grosjean. Rosberg continued to struggle with tire degradation, prompting him to take 4 pit stops just to compensate.

Hamilton got engaged in a heated battle for P5 against Mark Webber down the wire, taking it on lap 53 before quickly settling back a spot down. Webber fended him off again in lap 55, before Hamilton managed to edge the Red Bull on the final lap to claim 10 points for himself and the team.

The points allow Hamilton to move past Fernando Alonso (who finished P8 for 4 points) and take third place on the drivers’ standings. Vettel still leads the way with 77 points, followed by 67 for Raikkonen, then 50 for Hamilton.

Mercedes AMG Petronas stays at fourth in the constructors’ standings with 74 points, but managed to trim the third-place Ferrari’s lead to 3.

Tough #Bahrain GP for the team, with Lewis in P5 and Nico P9. Work to do before #F1 moves back to Europe but we’ll keep fighting as usual!