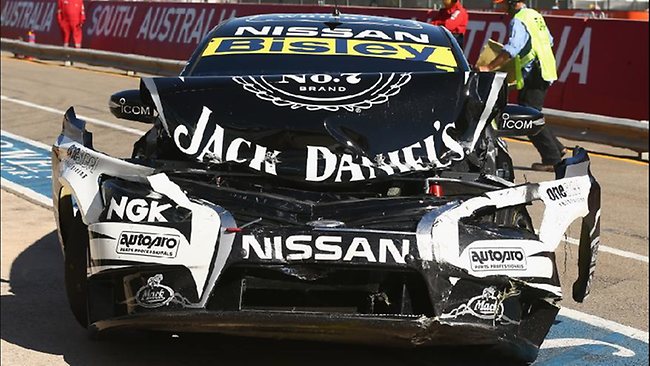 Todd Kelly’s Nissan was totally in bad shape after the initiation.

Last time, we featured the Mercedes-Benz V8 Supercars in action which you can see here.

The cars were definitely in good shape here and they appeared to be in a winning condition. However, the Clipsal 500 initiation left two of Mercedes’ cars really messed up.

Maro Engel’s car failed to reach the finish line on two cases due to throttle feedback issues. On the other hand, Tim Slade’s car experienced heat problems that were deemed no longer safe which forced him to retire from the race after 32 laps.

Despite the failure of the two cars, Lee Holdsworth’s Mercedes was able to finish the race in 17th place.

However, no one was more banged up than Todd and Rick Kelly’s Nissan Altimas. It apparently experienced two crashes which left it in a bad shape.