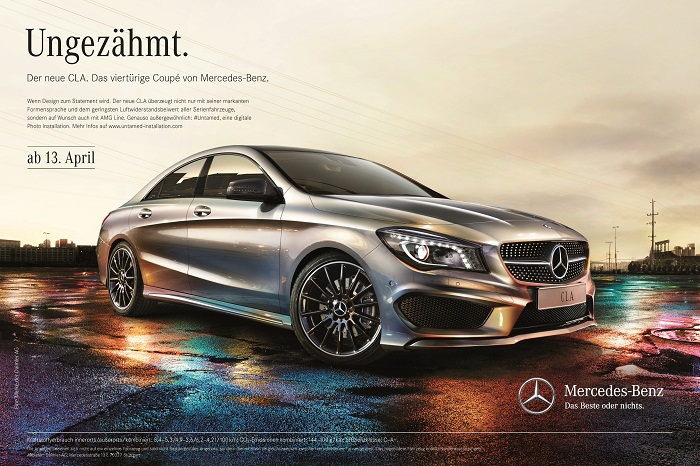 Previously, we showed you the “Untamed” TV spot for the all-new Mercedes-Benz CLA. Well, it turns out that it’s just the tip of the iceberg, as the “Untamed” campaign launches across all media platforms, showing just how extensive it really is.

The TV spot was already launched and should be shown on major channels on German television up until the middle of March. Of course, there will be print ads to complement this commercial, and these will be available on major publications, from newspapers to business publications and especially in automotive publications. Aside from “Untamed,” the print materials will also carry other headings like “Form: non-conformist.”

There will also be an #Untamed event that’s set to involve social media and online avenues. As you may have guessed from the hashtag, this aspect of the CLA promotional campaign will be taking advantage of immensely popular photo-sharing and social-media platform Instagram. Basically, people will be uploading images that demonstrate creativity and a desire to break free from convention. The results of the event will be presented in Paris sometime in April. You can visit www.untamed-installation.com to find out more. You can also watch the #Untamed video teaser below:

“The CLA will be in a vehicle class of its own,” said Mercedes-Benz Cars Head of Brand Communications Anders-Sundt Jensen. “As the little brother of the CLS, it will appeal to target groups who bring a certain non-conformist approach to life. The campaign therefore puts the car in situations that can be summed up as ‘Anything but ordinary’.”