SEND US A TIP
Featured, Formula 1
2 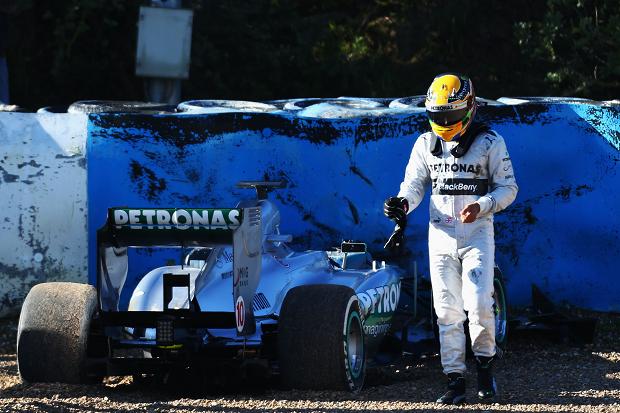 Troubles seem to follow Mercedes-Benz team during their testing in Jerez, Spain. After a very unfortunate electrical fault that caused fire to the rear end of the Silver Arrow driven by Nico Rosberg, the team experienced another setback when Lewis Hamilton crashed the F1 car he was driving.

It was revealed through Mercedes’ Twitter feed that the crash was due to a loss of rear brake pressure which stemmed from the hydraulic brake line linking the right-rear calliper. Thankfully, the front brakes slowed down the former champ’s impact. As a result, Hamilton stepped out unscathed after ramming the car to a pile of tires.

Mercedes-Benz news sources said that the impact damaged the front-left suspension of the car and some its aerodynamic parts. The team did not give further information regarding the time that it will take them to fix the problem.

The mishap occurred at Jerez track’s turn six where the infamous Dry Sack corner is located. The corner is where Michael Schumacher and Jacques Villeneuve smashed into each other during the 1997 European Grand Prix where the latter attempted an overtake.

Despite the problems, Rosberg, Hamilton and the rest of the team remain optimistic.