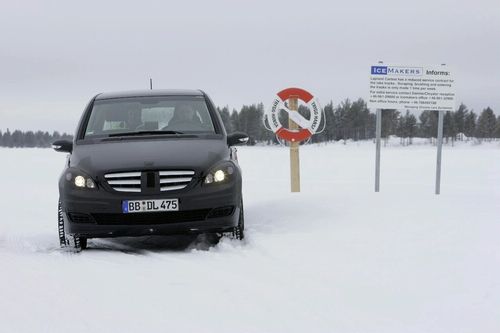 From the first glimpse of Mercedes-Benz electric drive concept during the 2012 Paris Motor Show, the development of this electric drive prototype has moved along stylishly to bring a combination of supreme functionality with comfort, style and driving pleasure for the owner and the whole family.

A set of spy shots revealed the Mercedes-Benz B-Class ED in its prototype form being tested on the cold weather of Sweden. The temperature in Sweden is below zero figures and with the fuel-cell drive, the B-Class ED has passed the cold-weather testing. The concept car is possibly using the Tesla-sourced lithium-ion battery pack that is setting in motion a 100-kilowatt electric motor.

The electric drive concept of Mercedes-Benz B-Class makes it through the cold weather (winter) as seen in these spy shots!

Possibly in late 2013, Mercedes-Benz will be offering the B-Class Electric Drive as a 2014 model and the only version of the vehicle for sale in the United States.