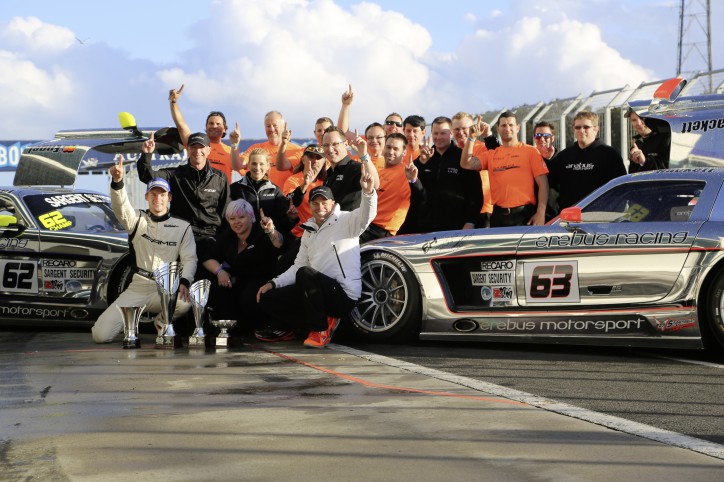 Over the weekend, there was more than the F1 race for Mercedes to consider. Despite the less than podium showing of the factory F1 team in Singapore, Mercedes’ customer teams brought welcome cheer to racing headquarters by finishing first in three different series events and a second in another.

First of all, the HEICO-Gravity Charouz has won both team and driver’s titles in FIA GT3 European Championship while the ALL-INKL.COM Münnich Motorsport took over the lead in the FIA GT1 World Championship as a result of its consistent race results. In the Australian GT Championship meanwhile, 1st and second places were won by Erebus Racing.  The venerable Black Falcon team also placed 2nd and sixth in the latest race in the Blancpain Endurance Series. All these stellar placings were obtained using customer-spec SLS racers. The fact that the SLS race cars have won and are leading various championships is a testament not only to the performance of the Mercedes SLS but also to the underlying philosophy of engineering excellence maintained by the company.

Understandably, Mercedes-AMG head Ola Källenius is very happy with these results. Said he, “I am very happy about the fact that the HEICO-Gravity Charouz Team managed to win no fewer than two titles in the FIA GT3 European Championship here on the Nürburgring. The start position in the FIA GT1 World Championship for the AMG Customer Sports Team ALL-INKL.COM Münnich Motorsport for the final in Donington on the coming weekend is more than promising.The guest entry of our AMG brand ambassador Maro Engel in the Australian GT Championship with one victory and a second position for Erebus Racing is also very pleasing. All of these successes on this race weekend are a welcome confirmation for our Customer Sports Programme with the SLS AMG GT3.“