Owner Drives An Icon As It Was Meant To Be 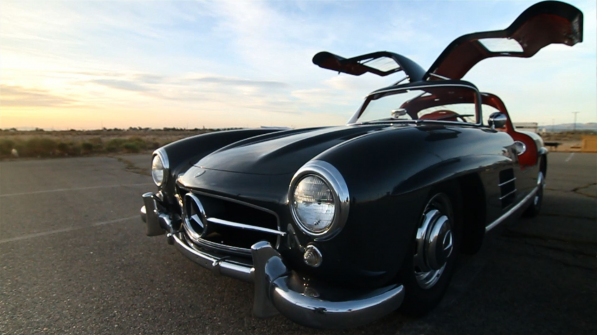 Without question, one of the most iconic classic cars in the world, Mercedes-Benz or otherwise, is the 300 SL Gullwing. Its beautiful shape, unique doors and outstanding performance combined to make it a true instant classic. First introduced in 1954, the SL (Sport Leicht) was never in abundance, as only 1,400 Gullwing coupes were ever produced. In truth, the 300 SL was a sweet-looking race car for the street, as underneath the beautiful body was a tube chassis, chosen for weight savings with acceptable strength. Since part of the chassis intruded into the section where a normal door would be positioned, the designers opted for the distinctive gullwing doors.

Suspension was via dual wishbones up front while the rear featured swing axles. In 1954, drum brakes were considered adequate, so that’s what the car was equipped with. The engine was the straight six as used in the original 300-series cars. However, it was equipped with a Bosch mechanical injection system which made it a pioneer in the use of fuel injection for cars. Engine output was from 210-220 horsepower, and coupled with the low-slung body, enabled the car to reach a top speed of 160 miles per hour. 80% of Gullwing coupes produced were bought up by the U.S. market.

Today a Gullwing coupe fetches from 600,000 to almost 900,000 U.S. dollars, depending on the condition. In 1954, one could be had for $8,000. Very few cars would be in mint condition today, since these cars were obviously driven by their original owners as they were meant to be, and some were undoubtedly crashed. But the 60-year old W198 300SL Gullwing continues to be a dream car to a lot of enthusiasts. And perhaps, the consummate collector of this particular Mercedes product is the one featured in the video below. As narrated in the video, this guy saved up for 30 years (nope, not a typo) to buy his dream car. And what does he do with such a rare, collectible and desirable car? Why he drives it like it’s supposed to be driven! Not one to put the car in a climate-controlled garage with a trailer to bring it to shows, this owner and his wife travel the U.S. in all kinds of weather and less than optimum roads. In return, the car rewards him with typical Mercedes reliability with high performance to match. As he says, it’s so sad to see trailer queens that take tens of seconds to sputter to life and then stumble all of 20 feet before the engine quits. And this writer agrees.

To be sure, icons of the automotive world like the 300 SL Gullwing deserve to be put on a pedestal for posterity. But we doff our hats to owners like these who enjoy their priceless automobiles as they were meant to be driven.