SEND US A TIP
S-Class, Technology
2 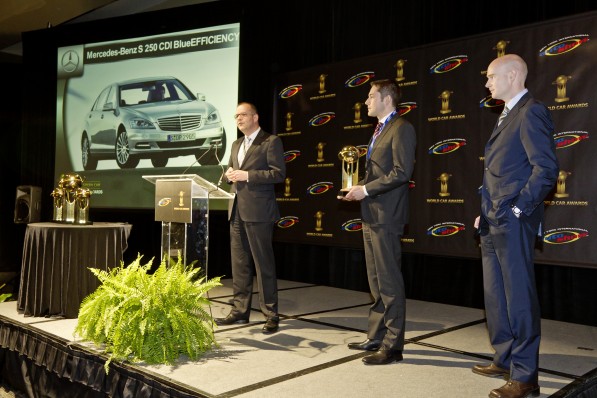 At the annual World Green Car awards coinciding with the New York International Auto Show, Mercedes garnered for the second time this award which recognizes the world’s most efficient cars. Initially won in 2007 by the carmaker’s E 320 BlueTEC, this year’s award was garnered by the Mercedes-Benz S 250 CDI BlueEFFICIENCY. It bested 23 other entries such as the Ford Focus Electric and the Peugeot 3008 Hybrid.

The S 250 CDI BlueEFFICIENCY is the first four-cylinder engine used in the S-Class, with the diesel unit achieving fuel consumption levels of just 5.7 litres per 100 kilometres. Says Prof. Dr. Thomas Weber, Board of Management, responsible for Group Research & Mercedes-Benz Cars Development, “The highly efficient gasoline and diesel engines in the S-Class show that our customers can drive a luxury vehicle with a clear conscience. The S250 CDI is the most impressive example: with a fuel consumption of only 5,7 l per 100 km, the S250 CDI is the most fuel-efficient luxury sedan in the world.”