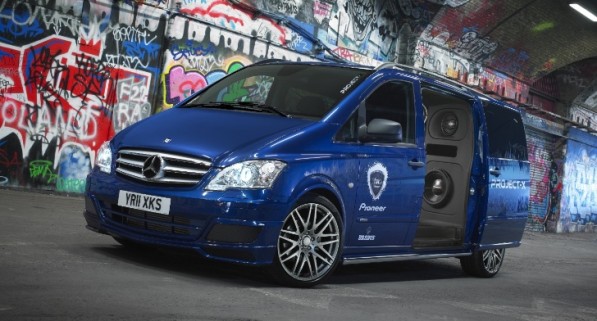 When you want to literally shake the ground with your premium audio system, mere cars are too small to cram in all those speakers, enclosures, amps and signal processors. Thus Pioneer wisely chose a Vito 122 CDI as its platform for building up its Project X DJ van. With two 15” competition class SPL and four 10” Champion Series subs, two Pioneer CDJs, a state of the art mixer, eight independent amplifiers, four batteries and a 300amp power supply, the system does need the Vito’s 224 horsepower diesel V6 to haul all that equipment around. And one can only imagine how that Vito sounds when the DJ cranks that 30,000-watt system to 11!

Adding to the wow factor are a Brabus steering wheel, Brabus leather shift knob, lowering springs, chrome sidebars, Sports exhaust, metallic paint, tinted glass, colour coded bumpers and chrome grille and tailgate trim. Cost of the system and other visual mods reportedly are in the region of 25,000 pounds, in case you were wondering how much it would cost to replicate.