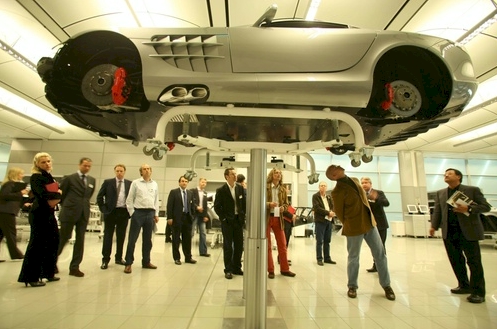 The number 125 is an auspicious one for Mercedes-Benz.  As followers of this blog and all things Mercedes know, this is the year Mercedes-Benz is celebrating its 125th anniversary as an automobile manufacturer. But perhaps just as important and significant for a company that intends to be on the map for the foreseeable future, 125, plus four zeros after it, represents the number of vehicles the company will be producing this year. This more than 1.25 million record follows the production record set last year.

Says Dr. Wolfgang Bernhard: “Mercedes-Benz is going on the attack. We are securing our path to the top by extensively investing in the expansion of our high-performance production network.” What Dr. Bernhard was elaborating on is the fact that Mercedes is spending billions of Euros to expand its production capacity in line with increasing sales. Apart from vehicle assembly lines, the German carmaker is also setting aside a multi-billion fund earmarked for the production of axles, transmissions and other powertrain components.