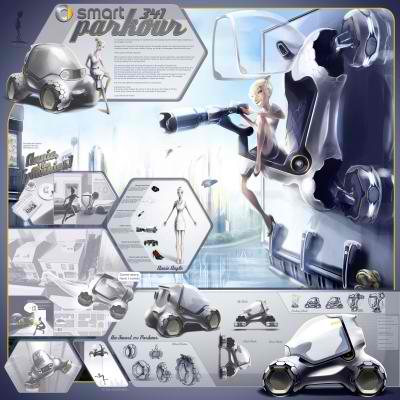 Imagine Mercedes-Benz Silver Arrow brought to life. Then smart cars climbing the facades of skyscrapers and Maybach as the luxury carriage of Cinderella. Well, you can see all of that – in the 2011 Los Angeles Design Challenge at least.

The film is set in the near future, starring two crash test dummies who will try to save Mercedes-Benz Silver Arrow from the hands of the evil Dr. Crash Barrier. They will be engaged in action packed scenes until of course, the Silver Arrow is saved.

Sindelfingen, Germany’s designers made the Maybach car as a luxury carriage with full suspension from the 17th century. This will be for the remake of the lovable movie, Cinderella.

The plot is the film “Annie get the Grannies”. In this story, Annie Angle read a newspaper about the incredible robots that disappeared. She set off, with a camera, to investigate her smart 341 Parkour.

The challenge is trying to find the greatest film car for Hollywood and of course, Mercedes-Benz Advanced Studios in Germany and Carlsbad, USA joined screenwriters for this project. It is a part of the Los Angeles Design Conference which will happen on November 16 to 17 at the Los Angeles Auto Show.