SEND US A TIP
Trucks, Uncategorized
4

Fuso Canter for Europe in Tramagal 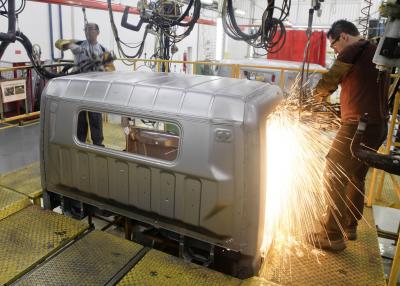 Daimler truck’s best-selling model, Fuso Canter is being produced in Tramagal. Thirty countries are being served by this location and the high-quality production methods of Japan are being adapted in this plant as they are working closely with Fuso in Japan.

The central production location for the Fuso Canter for Europe is in the town of Tramagal, roughly 150 km northeast of the Portuguese capital of Lisbon. The Fuso Canter, Daimler Trucks’ best-selling model, with a global production volume of over 150,000 units, is delivered to over 30 different countries from this location. The Tramagal plant is integrated into the Daimler Trucks production process and cooperates closely with Fuso in Japan on operational matters.

The bodyshell for the cab, which is carefully and precisely executed by hand, forms the basis for the high quality of the Canter. All metal sheets for all the production locations throughout the world are sourced centrally from Fuso’s Kawasaki plant in Japan. In addition to ensuring rational and favourably priced production, this guarantees standard high quality worldwide.
The metal sheets for the body are fully galvanised to ensure long-term corrosion protection. Single and crew cabs are produced in Tramagal on separate production lines. Using special equipment, employees connect the metal sheets with over 2000 welding points. The permitted deviation is as little as plus/minus 1.5 mm.

Around 90 percent of all Canter models are white. However, 86 additional paints are used in addition to this classic neutral vehicle colour. The basis for the Canter’s high paint quality is comprehensive pre-treatment with the cataphoretic dip priming (CDP) process.

Robots apply the final coat electrostatically, and with virtually no loss. To ensure perfect quality, the paint shop operates as a cleanroom with clean filtered air. Because of the high paint quality in cabs painted white, Fuso is now able to dispense with the primer coat. The coat thickness for the primer is at least 30 µm (1 µm corresponds to one thousandth of a mm), and for the final coat at least 40 µm.
Intensive control is a given: each individual cab is carefully scrutinised under high-intensity light. For example, no dust entrapment is permitted at the front or side, and only minimal entrapment on the cab roof and rear.
The frame, which is now shot-blasted in the pre-treatment phase and later powder-coated, guarantees optimum corrosion protection.
Assembly: detailed work in and around the cab
The following components are installed or mounted in sequence, with very close attention paid to detail: windscreen wiper linkage, window seals, wiring harnesses, door linings, the unit comprising the brake booster and pedals, interior trim and insulation, dashboard, windows, seats and the exterior mirror.
The seats are assembled in advance in a neighbouring hall by a supplier, and are then added precisely in the production sequence for the vehicles. After assembly, the cab is swung over to the next line to be connected with the chassis at a stage known as the wedding station.
Wedding station: frame and cab come together
This “wedding ceremony” is performed at the end of the chassis assembly line. The Canter frame is assembled in Tramagal from supplied, prefabricated parts in a new plant section. Preassembly of the frame and axles is performed separately. The components are fed into the chassis production line from the side.

Each Canter is then subjected to a detailed inspection. Specially trained staff check all of the functions in the new truck, covering engine and transmission, heating and air conditioning systems, down to the windscreen wipers. The wheel alignment and headlights are adjusted and set, along with the speedometer and tachograph. There is also a final, detailed visual inspection. The operation of the anti-lock braking system is also tested on a short test-drive circuit on the plant site.

But all this is still not enough: the plant checks two vehicles per day for leaks in a sprinkling system. New Canters are also tested under operating conditions at regular intervals. For this purpose, they are loaded up and must complete a standard 30-kilometre course over varied terrain. Each day, two new Canters undergo a thorough check-up in the course of a rigorous audit.

Around 50 percent of the parts for the new Canter sourced from Europe
In terms of value, roughly 50 percent of the parts for the Fuso Canter in Tramagal come from over 90 European suppliers; these include engines, axle components, springs, brakes, tyres, headlights and lamps, and also the seats and numerous interior linings. Fuso supplies parts from Japan, mainly for the cab and frame, but also axle parts, the steering system, heating and air conditioning systems and, following the model change, the innovative Duonic dual-clutch transmission. The Tramagal plant is certified to DIN EN/ISO 9001 and 14001.

Tramagal – a traditional plant with a wealth of experience

Part of the Daimler Group since 2003

Since the start of Canter production in 1980, approximately 160,000 vehicles have been produced in Tramagal. Today, they are exported to every country in western, northern and central Europe, and also to southern and eastern Europe and Israel. The plant is well prepared for the future: the plant site covers an area of 110,000 sq. m, of which only one third has been developed to date.